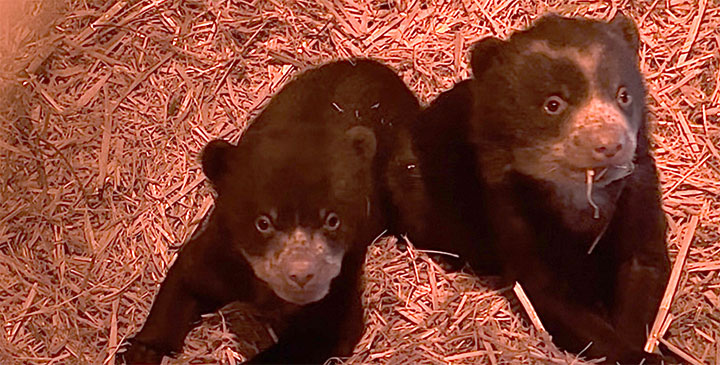 On Jan. 18, the Salisbury Zoo's female Andean bear, Chaska, gave birth to twin boys. Newborn bears are very fragile. At birth, Andean bear cubs weigh less than a pound and will not open their eyes for more than a month. The last two months were critical as mom and the cubs bonded. Andean bears prefer quiet and seclusion to give birth and are very susceptible to disturbance, which may cause abandonment.

Pinocchio, the father of the cubs, is separated from Chaska and the babies. He has access to his den and the bear yards, which are visible to the public. This separation mimics behaviors of wild Andean bears, as the male does not stay with the female and cubs.

“We can only imagine how happy Chaska is feeling right now," said Zoo Director Leonora Dillon. "We know everyone will be so excited to meet the cubs once they are out on exhibit, but until then, they can get sneak-peeks of them via our social media."

This is the third birth for Chaska, who just turned 12 years old, but her first birth to twins. Chaska is an experienced mother and is very attentive to her two cubs. As they get a little bigger during the next month, the cubs will be venturing outside, enabling visitors to see them.

Through the Salisbury Zoo's partnership with Ecuador, the Zoo has been able to continue its long-term commitment to the conservation of this species. It is estimated there are fewer than 10,000 Andean bears left in the wild. They are the only bear found in South America and live in the Andes Mountains region.

The twin bears are shown at nine weeks old in the above photo, provided by the Salisbury Zoo. The bears do not yet have names.